Jasmin Caton has an impressive outdoor resume: she’s a ski guide, rock climbing guide, professional climber, Patagonia climbing ambassador, and owner and operator of Valhalla Mountain Touring. Born and raised in the tiny community of Hills, BC, she now splits her time between the Valhallas and Squamish. Her real claim to fame? She was conceived on the Earl Grey Pass Trail.

Robyn Duncan, Jumbo Wild: When did you first hear about the Jumbo Glacier Resort? 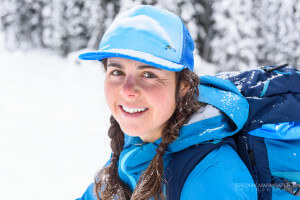 Jasmin Caton: I’d say in the early or mid 90’s sometime. My parents were environmental activists and I was aware of the local opposition and threat to grizzly bear habitat in my early teens.
RD: Almost a cliche: the Kootenay girl growing up with environmentalists for parents. I shared the same childhood.

RD: So from an early age, you were aware of the impacts to grizzly bears. You’re a ski guide and a rock climber – you obviously love being in mountains – was there ever a part of you that thought it would be good to have a ski resort in jumbo?

JC: No, not at all. I had the value of wilderness instilled in me pretty consistently from a young age. While I was growing up, I skied mainly at Summit Lake Ski Area, the t-bar hill near Nakusp. I didn’t have a lot of cash to go to bigger resorts, so I couldn’t really see how a resort at Jumbo would be good for me directly or indirectly. [

RD: Do you remember the first time you went to the Jumbo Valley?

JC: It was actually on the ski traverse last spring with Nick, Garrett, John and Leah (while filming “Jumbo Wild”). It’s crazy, but all my time in the mountains around here has been in the Selkirks!

RD: So your motivation to get involved in the campaign to keep Jumbo Wild was based on principle until last year. Did your visit change your feelings in any way? How was it to see Jumbo for the first time after knowing about it for so long?

JC: Seeing the mountains in Jumbo last spring completely amplified my connection to the place and solidified the feeling that the resort should not happen on any terms. I really fell in love with the Purcells on that trip.

RD: The Jumbo Valley is adjacent to the Purcell Wilderness Conservancy (PWC), southern BC’s largest protected area. You’ve spent some time deep in the wilderness of the PWC exploring the Leaning Towers — this is an area that takes a multiple-day approach to get to – can you tell me about your time there? 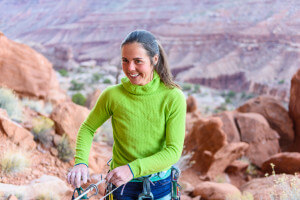 JC: The Leaning Towers trip was a true adventure. It took my climbing partner Kate and I two days to hike to our base camp beneath Wall and Block Tower, hiking up super steep avalanche paths, over rocky passes, and even scrambling down a third class rock step with our huge pack full of heavy climbing and camping gear. We hired a friend to help us carry our food in so that we would be able to have enough climbing equipment to tackle the steep east faces of Wall and Block Tower. When we arrived we were floored by the sense of solitude and the rugged beauty of the area. The perfect granite, pink alpine fireweed and blue tarns made an absolutely stunning backdrop for our week of adventure. We spent around a week there, with mostly unsettled summer weather, but were able to climb three routes, two of which were first ascents. We were blown away by the rock quality and how much we enjoyed just being there. It’s a special thing to be far away in the mountains with only your climbing partner, some simple food and the walls and glaciers keeping you company.

RD: I’d like to touch more on the value of wilderness. As a ski guide and a rock guide, your job is to take people out into the mountains and into the wilderness – do you think that people who recreate in the backcountry, in the wild, have a responsibility to protect it?

JC: Absolutely, and that is something I try to pass on to all the guests I bring into the mountains. From the little things like leaving no trace, to the bigger things like supporting organizations that work to preserve wilderness I try to pass on my values to the people I bring to the mountains. At the same time, I recognize there is a bit of a conundrum in the sense that my job as a guide and my passion as a mountain adventurer relies on taking people to wild places, thereby in some way diminishing their wildness. I justify this by trying to have the least impact possible, by recognizing that all activities are not meant to happen in all areas, and by trying to spread my love for mountains and wild places on to more and more people.

RD: Patagonia and Sweetgrass Productions’ documentary “Jumbo Wild” came out last fall and took the story of this fight to keep Jumbo Wild around the world. You were involved in the making of the film as a skier and you toured with the film throughout BC and into the USA as a Patagonia Ambassador – what was it like to be part of the film production? And the tour?
JC: It was really exciting to see the issue take flight into an international audience, and see so many people passionate about keeping Jumbo Wild. On a more personal level, it felt deeply gratifying to find a way to combine my passion as a mountain athlete and adventurer, with my passion to preserve wild places and be a good planetary citizen.
The tour was amazing in the sense that I found audiences to be genuinely connected with the issue, asking great and challenging questions and giving me great hope for people’s dedication and interest towards preservation of wilderness.

RD: One of the things that I found so incredible about the tour and people’s reactions to the film was not only the passion they felt for Jumbo, but the instant connection to issues in their own backyards and a desire to get more engaged. Did you see that taking place while you were on tour?

JC: Yes, absolutely. “Jumbo Wild” really inspired people to act on their home issues. The proposed Garibaldi at Squamish Resort is an example of a similar issue that audiences at the coast connected to.

RD: It’s incredible to see a made-in-the-Kootenays story going global and inspiring action around the world.

JC:I agree, but I am not surprised. People here are such amazingly active and caring folks. And I love the creativity that comes into activism here.

RD: The campaign to keep Jumbo Wild has been going on for nearly 25 years. It’s arguably one of BC’s most successful environmental campaigns, because Jumbo is still wild. What, in your opinion, is the biggest strength of the Jumbo Wild campaign?

JC: I think the biggest strength of the campaign is the number and diversity of people who truly believe that Jumbo should remain wild. From the Ktunaxa nation, to other local residents of Invermere, to conservation groups like Wildsight, to hunters, recreationalists, and people who just care about bears. I also think having a group like Wildsight to organize and galvanize the opposition to the resort has been a huge factor. It seems to me that a committed but disorganized bunch of people will rarely get anything done without some form of leadership.