Born and raised in Portland, David Reid’s background in environmental work and dispute resolution led him to Nelson in 2009. David has been the Executive Director of the Nelson-based West Kootenay EcoSociety for the past 7 years. This week is David’s last week with the EcoSociety, and with this profile, we send our sincere thanks to David for all he has done for the Jumbo Wild campaign over the years. We will miss you, David!
Robyn Duncan: When did you first hear about the Jumbo Glacier Resort?

David Reid: I first heard about it from one of my classmates in Victoria. When I told her I was moving to Nelson, she said, “Oh, you’re going to wind up working on Jumbo.” She explained what it was, and my first thought was “Oh man, I hope that stuff is behind me.”

RD: That’s an odd reaction to have?

DR: Before I moved to Nelson, I was working in Berkeley on urban livability. We ran referendum campaigns, grassroots lobbied, did education work, urban planning advocacy, and pushed for affordable housing. I got sick of the adversarial positioning of environmentalists vs. developers – I figured there had to be a better way. So I went to grad school for dispute resolution.

These situations are so deeply entrenched in positions that the conflict resolution isn’t realistic. You don’t resolve the conflict – you play it out until someone wins. Maybe that’s what makes it seem antiquated, or at least unsophisticated in terms of developing a better societal response to these questions about what wilderness is for. We have to finish winning all these dumb fights so we can make a good plan that incorporates economic development, wilderness conservation, and climate change.

RD: That’s an interesting perspective. If I follow that line, what would be a sophisticated response to the JGR proposal?

DR: A more sophisticated response would have been a CORE process with integrity and teeth.

RD: Right. More teeth, and possibly more avenues or a different process from which to respond to new proposals?

DR: I don’t think the response to the JGR was unsophisticated – it’s just that it was a response to a specific proposal rather than the general question of how we are going to manage our economy within the context of wilderness and environment. Our thinking about “the environment” is dated. I think we know that it’s dated, but we haven’t actually updated our underlying metaphors and discourse to reflect our knowledge that we are not separate from “the environment.”
RD: There is a long history of strong “radical” advocacy from the West Kootenay – it must’ve been an interesting introduction to the campaign?

DR: There’s no doubt in my mind that we did the right thing in responding to Jumbo the way we did – political pressure, grassroots mobilization, regulatory pushback. I don’t think there’s a win-win or even a compromise when you start from such opposing value systems. 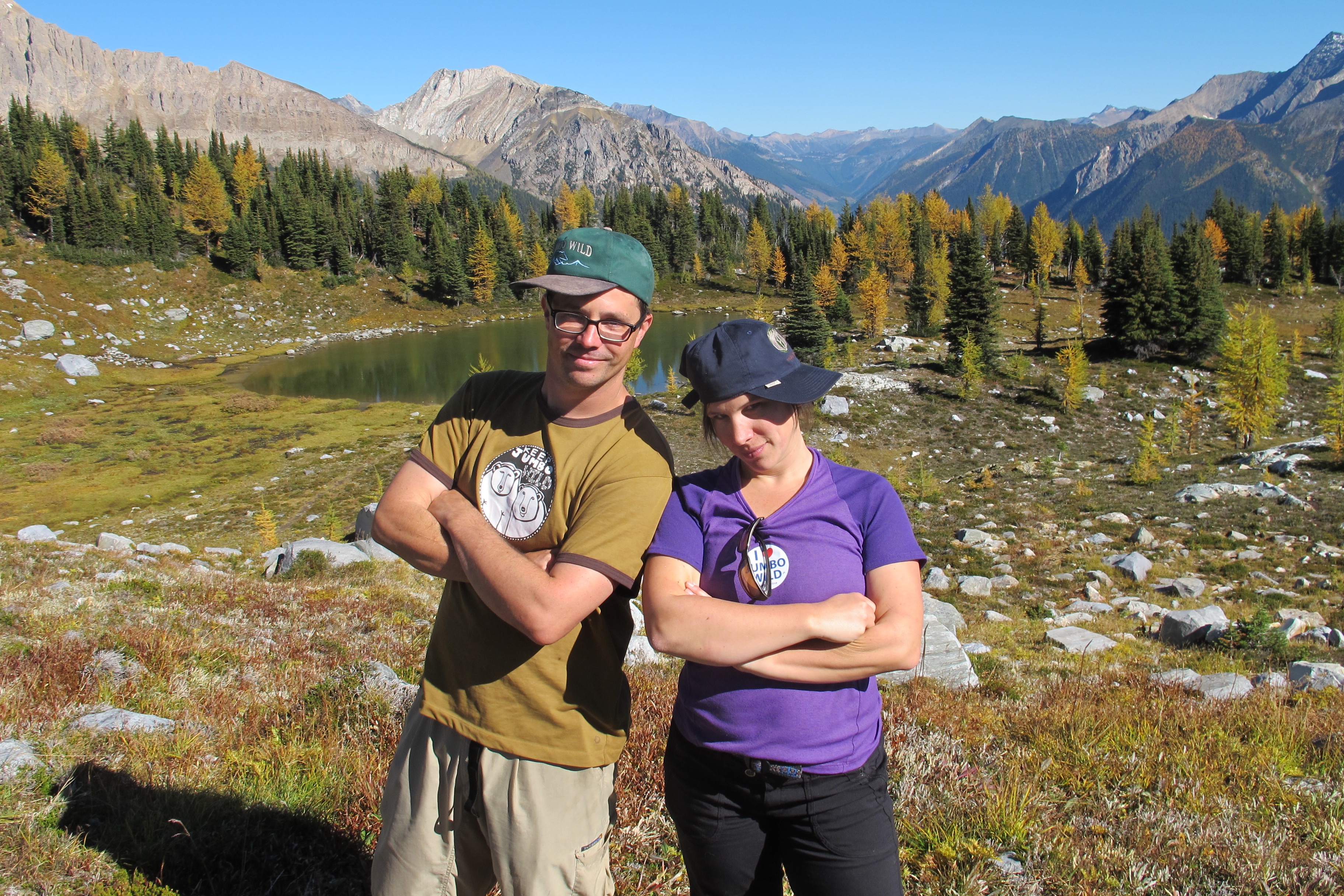 DR: It was pretty inspiring and humbling, both to join the Jumbo Wild campaign and to visit the valley. My first visit was actually just a few years ago, on a hike we organized for WKES. In fact, I don’t think I’ve ever been there except to lead a group hike or participate in a camp/rally/whatever.

RD: So, before actually visiting Jumbo, you spent years working to oppose the JGR. How did visiting Jumbo for the first time add to that? Or did it?

DR: Like I said, visiting Jumbo was both inspirational and humbling. Visiting definitely changed the dynamic for me. Jumbo has an identity as a place that is really obvious when you get there. I mean, every place has its own identity, but the landscape of Jumbo is so impressive and so self-contained in a way.
Coming from the west, you’re climbing up the pass, climbing, climbing, and you have the landscape of the Glacier Creek Headwaters to your back, with Horseshoe Glacier and the Macbeth Icefields visible. You walk through a larch forest that transitions you from where you’re coming from to the pass, and then suddenly, you see Jumbo in front of you. It’s a huge payoff moment, when you realize, “Oh, I’m here!” 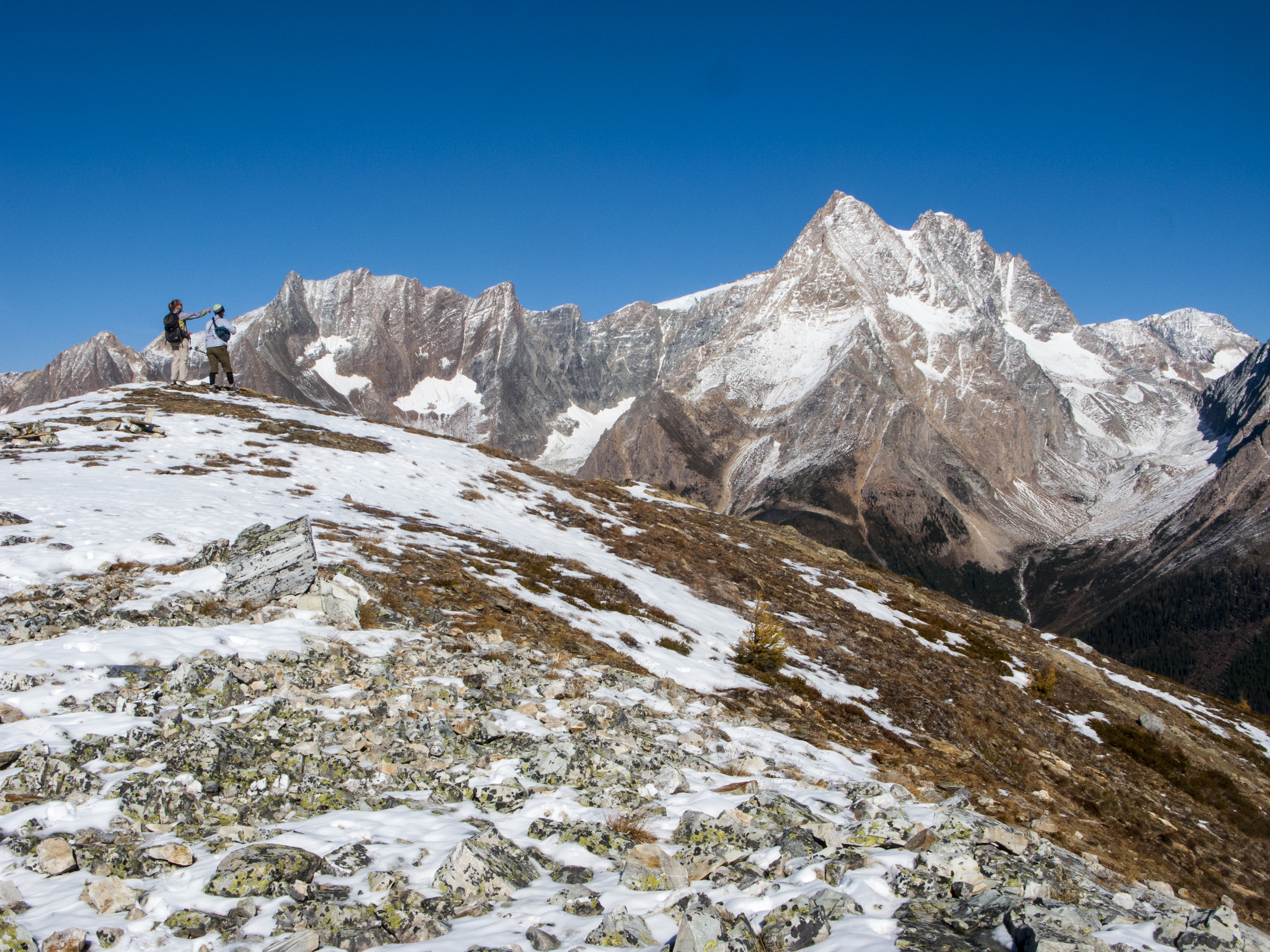 As you walk further east, you can see the valley opening up beneath you, with Bastille framing to the right, and Glacier Dome off at the other end. There’s a real sense of having arrived somewhere. I think I’m like a lot of people in that Jumbo occupies a place in my imagination that represents a treasured remnant of wilderness. I can picture myself there right now and can feel how hard it is to internalize the idea of coming over that rise and seeing ski lifts, gondolas and a village at the base. We all know it’s not “pristine”, but looking over the valley, you can imagine a place that’s whole in a way. You can see it as a place almost unto itself where the ecosystem is functioning without the intervention and disruption of human industry. Of course, this isn’t really true due to the logging, but I think for me and for lots of other people it’s a thing you can imagine.

I can understand why Oberto was inspired to make a human community there – it’s kind of a pocket in the mountains that is so picturesque. I guess that’s the difference – and something that came out in the film – he values wilderness as a place for people to be as we are, I see it as a place for people to visit and reconsider who we are and what we can be.

RD: Part of the uniqueness in the campaign is that the landscape bridges the East and West Kootenays, forming unique partnerships between communities and organizations. The WKES has taken a lead role in fighting the creation of the JGMRM – the town with no people – in court. Can you speak to that? To your decision to take the fight to the courtroom?

DR: We need these places, and in a sense, we need these fights. To remind us that we are still developing, still emerging, still evolving as a species. Just like as individuals, still finding out how to grow and learn and integrate lessons into our lives.

Taking the fight to the courtroom was both hard and easy. It was a big commitment, and an ambitious one, and there was a certain amount of risk involved. It was difficult work, too. But in another way, it was obvious. Personally, I couldn’t just let that miscarriage of democracy go unchallenged. Even though we lost the challenge on narrow legal grounds, I felt it was important not just to stop the development, but to argue against the process that alienated citizens from their right to participate in determining their future and their relationship with their place.

For the EcoSociety, it spoke to the reason we exist as an organization. Our mission is to protect the natural environment and build sustainable communities. Challenging the JGMRM was both.

RD: That seems to be the message that is resonating around the world as people watch the “Jumbo Wild” film: these issues and land use processes are happening all the time. It is our right to participate in the decisions that determine the future of our backyards, of our wilderness areas. Part of what has been so heartening for me to see as this message travels the world is to see such support for ENGOs, like the EcoSociety, like Wildsight, like JCCS, who exist to speak up for wild places, to engage in land use in these processes.

DR: When I look back at how much support we’ve had from our community for Jumbo, I feel a tremendous honour has been bestowed on us. Of all the money we raised and spent on Jumbo in the last few years, we only had three or four donations of $1000 or more – all the rest of our support came from hundreds of much smaller donations, including my neighbour who had a lemonade stand to raise funds for Jumbo.

And then you have people like KL Kivi, MIchael Gilflillan, Rob Meaney, Pegasis, and Rowena Eloise There are thousands of people who have signed petitions, and hundreds have come to rallies and events. Dozens have participated in meetings and helped organize. All these people are part of the movement, and part of the community. 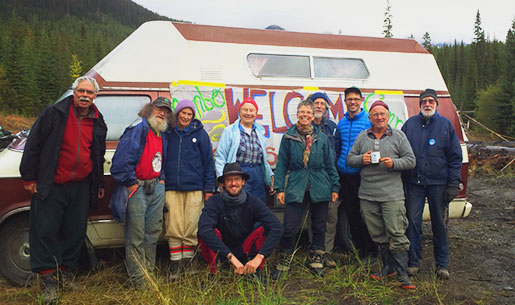 And then there is a small handful of people who put their lives on hold to do literally everything that they could to keep jumbo wild. Days, nights, weeks in camp, with snow falling, torrential rain, the possibility of arrest, the likelihood of confrontation. They’ve done so much. I have two reflections on these people. One is that they are heroic, worthy of emulation in that they have organized their lives to allow them to stand up for their core beliefs in a way that many of us have not. Lots of people have excuses – these people have dedication that goes above and beyond.

The second thought is that in a way I work on behalf of these people. Lots of people have given money, and in a way I work for them. But the people who give of their lives instead of their wallets, I have a special place in my heart for them. I am deeply grateful to know them and work with them.

RD: The campaign to keep Jumbo Wild has been going on for nearly 25 years. It’s arguably one of BC’s most successful environmental campaigns, because Jumbo is still wild. What, in your opinion, is the biggest strength of the Jumbo Wild campaign? You’ve had an inside view as an advocate – what sticks out for you?

DR: The biggest strength for the Jumbo Wild campaign is that the power of the landscape inspires such a deep commitment from the people who care about it. And that it is so easy to love.

RD: As you prepare to transition out of your role as Executive Director, do you have thoughts on how it will be to leave the campaign?

DR: As for me, leaving West Kootenay EcoSociety will be hard, because it’s hard to give up the privilege to be paid to do your life’s work. I’m certain that West Kootenay EcoSociety will continue to grow and to create amazing opportunities to protect the natural environment and build sustainable communities, and I’m certain that I’ll continue to be around in myriad ways. I’m looking forward to giving of my life as well as of my work.

RD: There are so many reasons to oppose the Jumbo Glacier Resort, but what is the reason that stands out as the most important to you for keeping Jumbo Wild?

DR: The most important to me is the inherent quality of Jumbo Valley and its place in our ecosystem, including the ecosystem of our imaginations that keeps us inspired to make the world a better place.

RD: Thanks, David, for your time and for all you have done and will continue to do. Good luck with the transition!