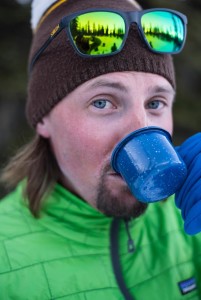 We’re happy to launch our new series, “I Love Jumbo Wild” that will feature profiles of people and their connection to Jumbo. First up, is 30 year-old Brodie Smith from Invermere, BC. Born and raised in the Columbia Valley, Brodie is a Ski Guide and a Director of the Jumbo Creek Conservation Society.

Robyn Duncan, Jumbo Wild: When did you first hear about the Jumbo Glacier Resort?

Brodie Smith: I am from Radium Hot Springs. Actually Radium Resort (aka Radium Suburbs). I first heard about Jumbo when I was probably five years old skiing at panorama. I skied with Greg Deck’s kids [Greg Deck is the mayor of the Jumbo Municipality] and he used to talk about Jumbo when we skied at Panorama on the weekends.

RD: Wow, that’s a small world. And what was your first reaction? Had you heard of the Jumbo Valley before?

BS: No, I hadn’t heard about it before. But I was initially excited about it because I thought having another ski hill close to home would be rad.

BS: I think throughout my childhood and teenage years I had heard and seen so many pro-Jumbo-resort things in the community of Radium that I wasn’t so sure what the opposition was all about. It wasn’t until I went heli-skiing in Jumbo for the first time when I was 18 that I realised how special of a place it was. I got my first job out of High School as a dishwasher at RK HeliSki and got to go staff skiing at the beginning of the season in Dec. 2003.

RD: Do you remember what it was about being there in the Jumbo Valley that made it so special? The view? A feeling?

BS: It was the sense of remote wilderness, the snow and the sheer beauty of the mountains there.

RD: And is that when you got involved in the campaign to keep Jumbo Wild?

BS: Sort of. It was the first-hand information from the guides at RK that made me realise the absolute ridiculous manner in which JGR wanted to build the resort. Everything from the townsite to the locations of the lifts and the glaciers they thought were skiable as ‘inbounds’ terrain. Also the fact that a business that had already been operating successfully in that area for 40+ years was going to be simply squashed to accommodate someone else’s idea. It was a day-to-day conversation at work there for eight years about the developments of the proposal, our efforts to fight it and the repercussions of the “what if” scenarios if things were to move forward with it.

RD: You have a unique perspective on the issue. You’re a local – Jumbo is in your backyard – and you’re now a ski guide who works in the Purcell Mountains. You’re also a Director with the Jumbo Creek Conservation Society, an organization that exists solely to oppose the Jumbo Glacier Resort. There are so many reasons to oppose the Jumbo Glacier Resort, but what is the reason that stands out as the most important to you for keeping Jumbo Wild?

BS: I feel super fortunate to have the opportunities to work in my backyard and also the freedom to recreate here as well. Primarily it’s the bears, but a close second is that fact that so much land in this world is being overdeveloped for so called “progress” that isn’t sustainable. We need to keep our wild spaces because so many people don’t ever get to experience them. There is a reason people come from all over the world to see Canada. It’s our WILDERNESS.

RD: You’re a ski guide and spend most of your time in the mountains. Do you think that people who recreate in the backcountry, in the wild, have a responsibility to protect it?

BS: I totally feel that it’s our obligation as users to protect, maintain and be good stewards of the land. It’s our fault if things go wrong so we need to be on our best behaviour out there. Many animals call it their home and we need to respect that like we expect others to respect our homes when they come to visit,

RD: The campaign to keep Jumbo Wild has been going on for nearly 25 years. It’s arguably one of BC’s most successful environmental campaigns, because Jumbo is still wild. What, in your opinion, is the biggest strength of the Jumbo Wild campaign? You’ve had an inside view as an advocate – what sticks out for you?

BS: I think what makes our fight such a strong one is the passion that everyone involved has for it. I also believe that just like the proponent has key people in the right places for their fight, so do we.

RD: Patagonia and Sweetgrass Productions’ documentary “Jumbo Wild” came out last fall and took the story of this fight to keep Jumbo Wild around the world. You were involved in the making of the film as a guide for the film crew – what was it like to be part of the film production?

BS: That experience was amazing. I felt so honoured to be a part of it and I gave it everything I could to make it the best presentation of information possible. I spent long nights on my computer sending emails, planning trips, applying for permits and organising people to orchestrate a lot of the filming in the mountains. I felt like I was finally able to give everything I possibly could to the cause and it paid off with an amazing piece of informative art.

RD: Is there anything else you’d like to touch on?

BS: I just want people to be aware of struggles like this in their own backyards and to take action.